SKOWHEGAN, MAINE   Forbes, in conjunction with Statista Inc, the world-leading industry ranking and statistics provider, recently announced the top banks in each of the 50 states as ranked by consumers. Skowhegan Savings was recognized as the 2021 Best Bank in Maine and third in the country, making the bank the only Maine based bank to be in this year’s top five. “I was delighted to hear that our team’s hard work and commitment to customer service had been recognized by such a distinguished company,” said David Cyr, president and CEO. 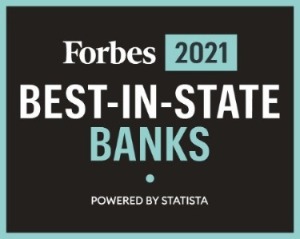 Annually, Forbes and Statista identify America’s Best-In-State Banks 2021 based on an independent survey of approximately 25,000 US consumers who were asked to rate banks at which they have or previously have had checking accounts. Of the 4,978 FDIC insured banks in the United States, only 135, or 2.75% made this year’s list. “Skowhegan Savings in Skowhegan, Maine topped our list for the state of Maine” wrote Forbes. According to the survey, banks across the US averaged an overall satisfaction score of 79.1 out of 100 while Skowhegan Savings rated 93.56 putting it at the top of their list for Maine and third in the nation overall.

“Skowhegan Savings has strived to make our communities a better place to live and work for over 150 years by providing valuable financial services to the people of Maine and being present in supporting the areas that we serve,” continued Cyr. “We look forward to continuing this mission well into the future.”

Skowhegan Savings has 12 branches in central, western and southern Maine after opening their new Portland Business Center earlier this summer. The Portland branch is the first location for the bank in southern Maine.